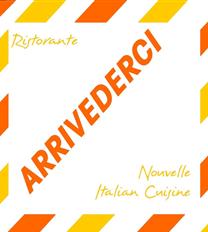 The Arrivederci story begins with Franco, born in Sorrento, a seaside village

on the Amalfi coast in Southern Italy.  After spending the first 25 years of

his life studying the fine art of Italian cuisine, Franco received the distinction

of "Maestro Di Cucina Italiano" (Master of Italian Cuisine) from the

A healthier way to eat.

Arrivederci was to specialize in Franco's new "Nouvelle Italian Cuisine"

which focused on fresh ingredients, no preservatives, and more vegetables,

partner Max Sahin, the Chef/Owner of Avanti's of La Jolla, CA.  The two

spring of 1995 in North Scottsdale.

inHouston, TX and finally by its newest location in Ahwatukee - Phoenix,

elegance, and impeccable service has made it the company's most popular

continue to thrive for many years to come.